Achived News for the Eastern Region

National Show and Sale of Traditional and Native Breeds, 9 & 10 September 2016,

We are delighted to have Hayley Higginson judging

This show is the newly named Autumn Food and Country Fair and from this year Jane Woodbridge has kindly offered to organise the event.

It is very exciting to have Geraldine Fletcher coming over from Ireland to judge this excellent event, which has special classes for late-born lambs, children and novices. Not to be missed!

National Show and Sale of Traditional and Native Breeds, 11 and 12 September 2015, Melton Mowbray 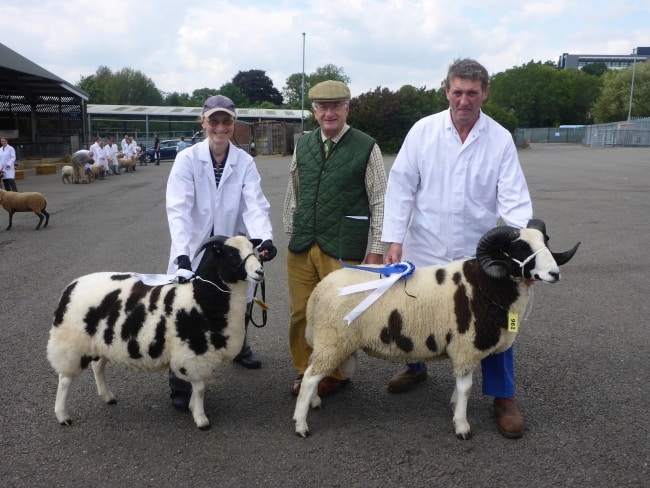 Ruth Kernohan with her Championship Shearling Ewe which sold for the top price of 330gns, Judge, Richard Chapman, and John Dixon with his Reserve Champion Shearling Ram, Douglas Simon 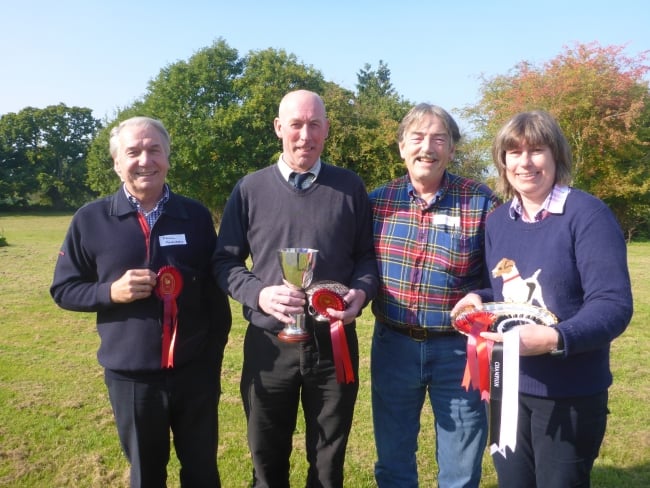 Trish and Bob Baker generously hosted 33 of us at the Old Gun Club on their farm at Woolpit. It was a wonderfully sunny day and we had novel open top transport to see the wide variety of animals that Trish and Bob have on the farm. We also had practical sessions on ear tags, shears and lamb identification, and the results of the flock competition were announced and awarded. 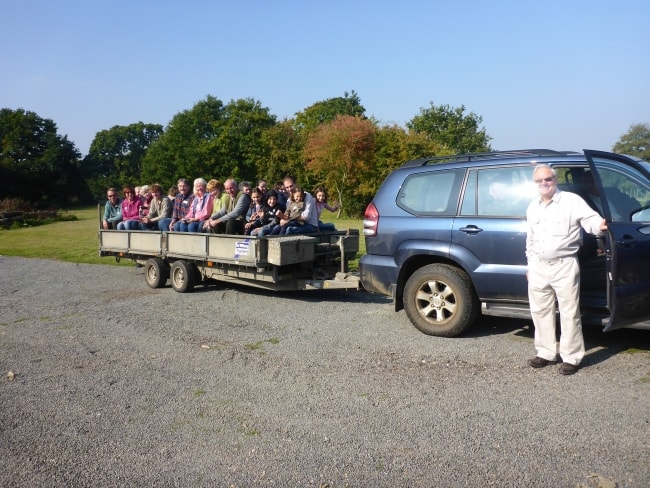 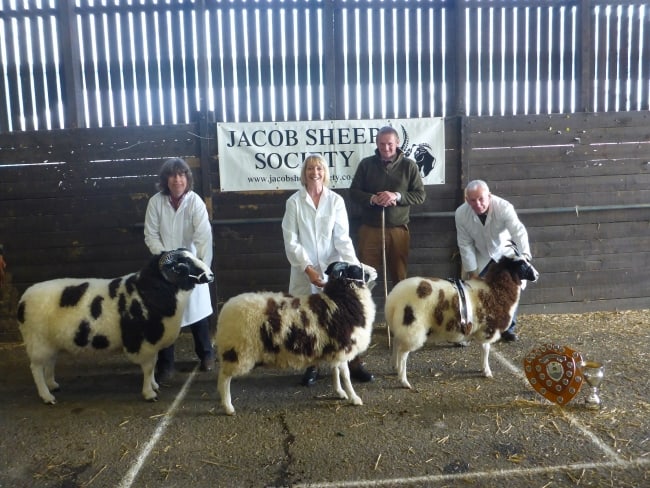 Judge, Stephen Dodsworth,with, from right to left, Alan Smith with his Show Champion late-born ewe lamb, Jane Nightingale with her Reserve Champion ewe lamb and Jane Woodbridge with the Best Opposite Sex to the Champion. 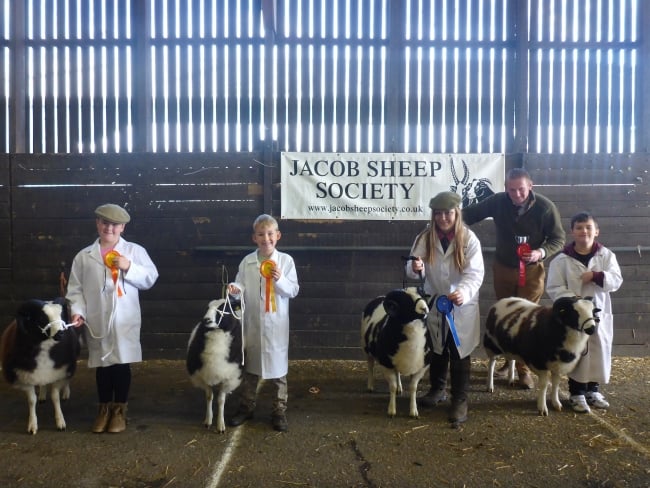 Jessica also won The Eastern Region Young Handler shield for 14-18 year olds for her efforts during the year in the show ring. Well done Jessica! 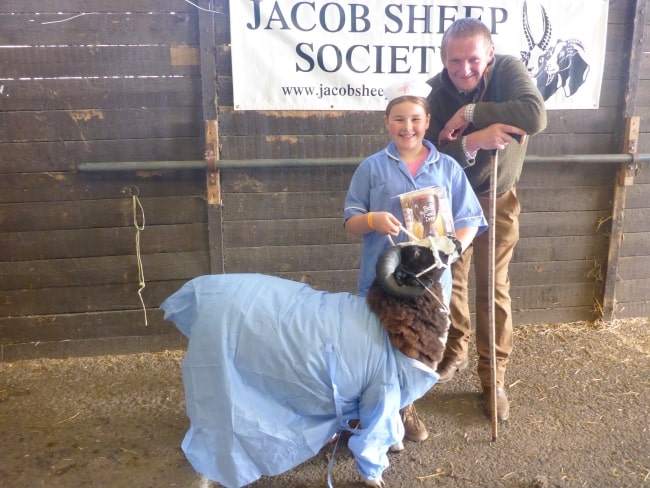 This is just what Peterborough is about, encouraging youngsters and novices to have a go in the ring.

Joan Freeland hosting an Open Day at her home : Elms Barn, Toft Monks, Beccles. A lovely day at one of the extreme ends of our region. 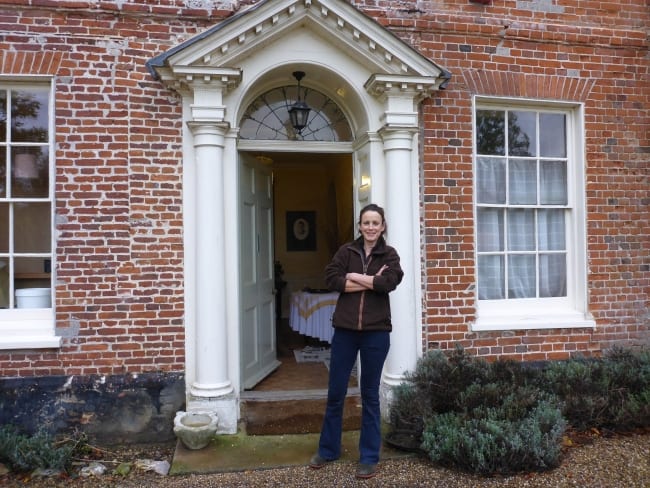 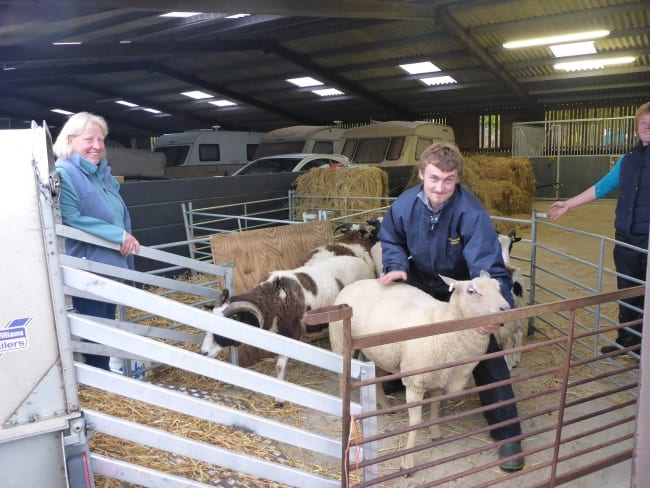 Martin Wallis and Jane Woodbridge (above left) kindly hosted our open day in May. Winners of the large flock competition in 2013 and regular show exhibitors they had a lovely pen of beautifully prepared shearlings for Judge, John Dixon (right) to take us through. Aswell as judging the shearlings, there were other breeds of sheep to identify, and a guess the weight of the lamb competition. Discussions were had on changes to regulations for sheepskin production and RPA inspections and hands-on experiences included Jakoti dagging shears and the New Zealand shepherd’s crook. Martin and Jane generously provided prizes for the competitions as well as an excellent lunch and refreshments. Huge thanks to them both.

Tom Green leading a lively deabte about the pros and cons of foot trimming at Danny and Maria Palmer’s Open Day near Ipswich in May 2014.

Both the judges of our flock competition generously gave of their time to come to the winter meeting to present their results. It was much appreciated to have them with us.

We also had a presentation from Tom Green and Lisa Adams on the vexed question of when to worm, with what and how often. This was followed by lively discussions on items coming up at the next JSS Council meeting and how things should proceed in the region.

Seven exhibitors braved the weather and it was good to have new and young members alongside experienced stalwarts. Huge thanks to Robert Locker for coming all the way from Scotland to Judge and there was great praise for his judging of the sheep off their leads.

There was a good turnout in the Handler classes with Caitlan Fincham winning the under 8 years and Tom Spalton winning the 8-16 years. the Novice Handler class is shown below with, from left to right: winner, Brogan Cranfield, Tom Spalton, Tom Collins and Joanna Collins.

The welcome return of the Fancy Dress class proved a great highlight, with an extremely high standard. From left to right: Tom Collins Dracula (winner) was almost repelled by Amy Ferguson with her Chef’s garlic and Danni Boland’s cowboy group with the hairiest Minihaha we have ever seen. Such fun!!

There were 83 Jacob entries at this busy show and sale and prices held up well on the Saturday. Richard Chapman judged the sheep classes on Friday. Here is the ram class being judged.

Grassroots provided a new service of kinship analysis on site to establish the degree of relationship between sheep at the sale and owners registered sheep, allowing gene pools to be optimised.

It was a lovely sunny day for the Open Day at Wildwood, home of Paul Kermeen and Joy King and the Fineshade flock. June and Alan Smith gave an excellent master class showing how to prepare sheep for showing and the ins and outs they have learnt during their showing experiences. They were very generous with their time and encouraged everyone to have a go, including one of our newest and youngest members, Rafferty Van Romunde just 21 months old! Here he is carding a ewe lamb with Alan.

We had a bit of excitement when the shearling escaped from the barn and several geriatrics tried to corner her, but it took the youthful Tom Green to get her back under control.

The ewe lamb and shearling had been washed three days before the Open Day and left to dry. Alan started first with the carding and June followed on with the trimming. They worked seamlessly together and in only a short time the results were amazing. They certainly didn’t look like our sheep.

After lunch there were tours of the house, CCTV, sheepskins and movement licence exhibits on offer. People went to see the rest of the flock in the fields returning to the barn for a ewe lamb and shearling assessment competition. John Fozzard very kindly took us through the finer points of what to look for in a Jacob.

Judging from the comments I have received since, it was an enjoyable day and our newer members learnt a great deal.

Huge thanks to everyone who came, especially June, Alan, John and Jane.

The sun was shining at Melton Mowbray for our Eastern region show and sale, and it was an excellent result for Mrs. R. Kernohan (Gelscoe flock) as her shearling ewe won the show championship whilst her ewe lamb was awarded the reserve championship! Many thanks to Mr. John Fozzard for judging our classes. Ruth’s shearling ewe then made the top female price of the day of 225gns. Top price in the male section was a shearling ram from L Adams at 410gns.

The show results were;

Tori Stanley with her Reserve Interbreed Tup at Rutland Show 2011

The results from our regional flock assessment were announced at our winter meeting held at Highgate Hall, Elton on 12th December. The results were;

The finale of the Eastern region showing calendar is the ever popular Autumn show. This was a busy day of showing for many exhibitors as they had entered in both our own Jacob show and the main Exhibition. In the Hill & Heath section of the main event, 4 out of six class winners forward for the championship were Jacobs (the commentator was very complementary about how far the Jacob breed had come) with the Hill & heath championship finally awarded to Alan & June Smith’s shearling ram. In our own Jacob show, Richard Chapman did an excellent job of judging a large entry. Tori & Ben Stanley won the championship with their shearling ewe whilst June & Alan Smith’s shearling ram won the reserve.

The Eastern region Open day was held at Kilby Grange Farm on the 5th September. This was a successful day with a sheepdog demonstration by international and national triallist Nij Vyas. The “spirited” Jacob cross ewes were worked beautifully by two of Nij’s sheepdogs whilst he explained how he trained his dogs, and the importance of a good dog. Local butcher, Marcus Stevens of Ullesthorpe, was on hand to assess a pen of Jacob fat lambs and demonstrate what to look out for selecting lambs for the market or fatstock shows.

Melton show & sale had one of the highest entries of Jacobs forward this year. It was great to see so many new and existing Jacob members visiting our stand to say hello and watch the showing of the sheep on Friday.  The championship was awarded to Miss L. Adams’ ewe lamb which later sold for 200gns with the reserve awarded to Mr & Mrs J Dixon’s ram which sold for £160gns.

Why not become a member of the Jacob Sheep Society? Join Online today..!

Buy the 2021 Jacob Calendar..! Click here for the story behind it.!