Welcome to the South West Region Jacob Sheep Society web page which imparts information to members in the counties of Dorset, Devon, Somerset, Cornwall and on the Island of Guernsey.

There will be an Open Day at the Natural Fibre Company Nr Launceston on 7th July.

This will include a Talk by Sue Blacker.  And a tour round the Mill.  And a question and answer discussion.

It will take half a day approximately.  We can then have lunch in a nearby pub.

Please support this interesting and informative tour.  For those members who make their own woollen items it will be particularly interesting, but everyone should find it fascinating.  I will be sending out entry forms nearer the time by email for you to print and return to me.  If anyone cannot print it let me know and I will post one to you.

There will be an Open Day kindly hosted by Janet East on the 8th September at their farm at Payhembury Honiton.  Details nearer the time.

The AGM  lunch and Talk will be held on the 6th October at the Memorial Hall and Social Club at Dillington Ilminster.  Details nearer the time.

The Breed Promotion Stand will be at the NSA Event on June 18th and at Melplash Show on the 22nd August.

If anyone can pick up the stand from me and take it to the Royal Cornwall Show Liz Roberts has offered to help mann it there.

And if anyone would like to take the stand to any other show please let me know so I can apply for a trade stand.

Everyone welcome including non members. Anyone wishing to come please let me know prior to the meeting.

The date of the South West Region Flock Competition is 7th to 9th September 2018.

The Judges will be Paul Colhoun the Ireland RCM and Adrian Hamilton.

There are two categories small flocks of 11 ewes or less  and large flocks of 12 ewes or more. Further details will be posted closer to the time.

But please do consider entering your flocks for assessment I found it to be really helpful and a lot of fun too.  The competition part is less important than the assessment I feel, but its always nice to win a prize!!

We really need 10 flocks to make it worthwhile Paul coming over from Ireland and I am delighted that he has agreed to judge our flock competition.  I am assured that he will judge our sheep in a empathic and supportive way.

Please email me at sarahbliss2003@hotmail.com or phone 07881611763 for those who don’t use email and I will forward you an entry form and the guidelines.   The cost, to cover the Judges expenses will be £25 per flock

I look forward to being inundated with requests for Entry forms.

The date of the South West Region AGM is the 21st October.  It will held at Whitelackington Village Hall. Dillington, Ilminster Somerset.

Hello everyone, I am Sarah Bliss and here are just a few lines to introduce myself.

I come from a large happy family. My 4 brothers and I were brought up in the Buckinghamshire countryside.  My Father was a Vicar and my Mother a Teacher.

I have two daughters and five grandsons.  When the girls were small we lived on a beautiful estate in Gloucestershire.  I was the Head Groom of a hunting and point to point yard.  The estate ran  a flock  of 400 Scotch Half breds that I use to help lamb.

After 20 years I decided to move on and run my own business growing organic mushrooms.

From there the girls and I moved to North Wales where I bought some property and worked with Disadvantaged young people.

And then we moved to Somerset where I bought a smallholding and bred texels and mules Berkshire pigs, geese, ducks and chickens.

Finally after 12 years I sold the smallholding and moved to the beautiful estate of Dillington where I have some land and a cottage and fulfilled a cherished dream to breed Jacobs.  Another exciting adventure.

Great first day visiting the Halsbury Flock as well as the valais blacknose sheep and the Red Ruby Devon cattle. Then onto Arlington Court Flock, House, carriages and Gardens followed by a Devon Cream Tea.

Big thank you for a fabulous AGM weekend down in the South West. Superb hospitality, great food and a very warm welcome from a hardworking team.

Christopher and Charlotte Slee's Halsbury Flock. An amazing sight of 50 or so ewes with lambs set against a spectacular view. The Ruby Red Devon cattle were also on show, lovely animals.

After a light lunch we moved on to Arlington Court and the Arlington Flock comprising some 60 ewes.

Finally we gathered for a buffet meal at the hotel.

Lovely sunny second day of the AGM in Cornwall.

With the AGM business concluded, we headed to Julia Staughton's Tooma Flock. Again set against a spectacular vista and with generous hospitality, we admired the sheep which had been gathered inside for us to see.

In the evening we met at the drinks reception, joined by Libby Hanson and Jenni Collins, and enjoyed another lovely meal followed by a lively auction. Various volunteers demonstrated some of the auction items..

Third day we went to the Redlands Flock. He currently has 25 breeding ewes and two stock rams. We saw a lovely flock of sheep and then we all went on a tractor ride to see some cattle and back to the farm for a lovely lunch.

After a very nice spit roast lamb lunch, we moved on to visit Compton Castle, home to the Compton Flock, Angela Gilbert. This castle has been home to the Gilbert family for most of the time since it was built in the 1300's, and retains a rare degree of originality. We took tea and cake in the great hall warmed by a blazing log fire.

Saturday night was Gala Night and what a fantastic night we had with amazing food and great entertainment during the auction with some fantastic auction items as well as a great raffle too! We would like to say a HUGE Thank you to the Hotel who have been fantastic from start to finish!

From Council:  All rams should be on halters at shows.

21 September - Show and Sale at Sedgemoor. Congratulations to Liz Roberts from Cornwall with her awards for entries in the 2017 Wool Cup.

Congratulations to Mike Bundy for his awards at the Devon Show, which included winning Best of Breed with his Aged Ram. 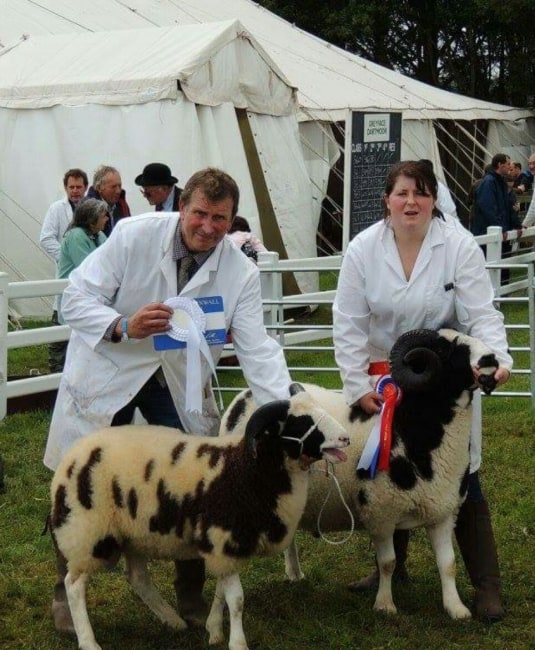 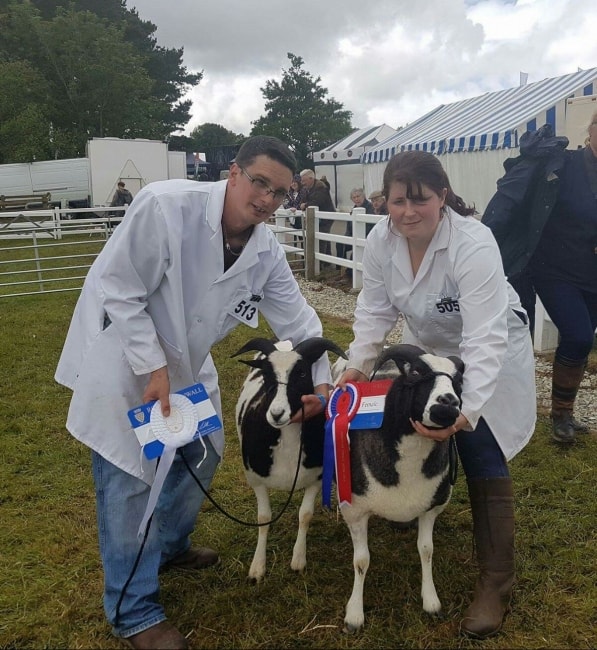 Okehampton Show
Did you see the Breed Promotion Stand at the Okehampton Show?
Through the show season Sarah Bliss and Steve Campbell work hard at breed promotion and they deserve the protection of the new gazebo which has been bought with SW funds this year.. 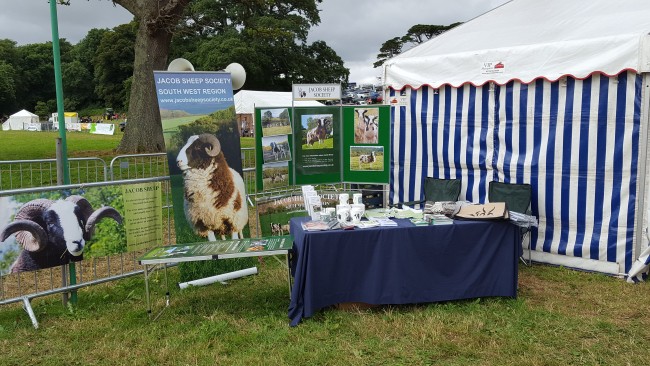