Welcome to the News page for the Central Region, which includes the counties of Staffordshire, 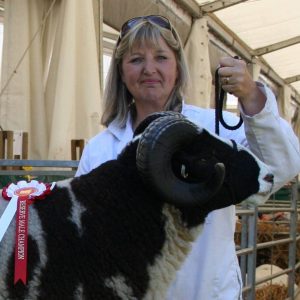 Please let me introduce myself, I am Kay Carpenter from the Lickhill Flock.

My family and I farm in Worcestershire, where we run both pedigree and commercial livestock. We have a suckler herd of beef cattle and a commercial flock of crossbred sheep, along with around 30 pedigree Jacob ewes.

Jacobs were the first breed of sheep we kept and I was instantly hooked. After 14 years in the Society I regard the members as friends and you will often find me at the after show celebrations regardless of how well, or not, we have competed.

August 2022 - This current heat wave is hitting hard. So hot and dry for so long that we have no green grass at all here in Worcestershire and I’m feeding hay out in the fields. Earlier in the summer we were showing sheep in downpours of rain!

However it has been wonderful to get back out at the shows, meet up with competitors and talk all things sheep! 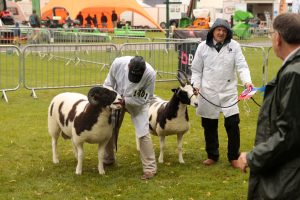 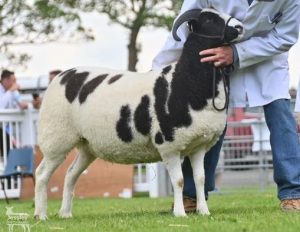 Betty went on to win reserve interbreed champion at the show. 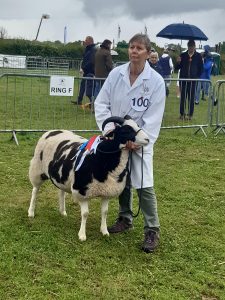 As ever, the sheep themselves are a great attraction at this event. Huge thanks also to Terry Barker for his time and effort in sourcing new back drop stands for the Society.

Central Region Show and Sale. – Record breaking sales this year as the Overall Champion, a shearling ram, from The Trumper Family, Beiliau Glenfiddich sold for 3,200gns.

This really was a sale for the males this year as the 2nd prize shearling ram and male reserve from the same vendors went for the 2nd highest price of the day at 1,800gns. The female champion and overall reserve went to an Edingale shearling ewe sold by Mr RF Price and reached a hammer price of 400 gns.

Upcoming events for your diaries

Autumn meeting & AGM Sunday 16th October– to be held by kind invitation of Jane and Alan Nightingale. As always the invitation to view the prize winning Firtree Flock extends to all regions and a flyer, with further details, will be available later in September.

Christmas Meal late November – I shall be organizing a social get together for Christmas before we all bed down in the lambing shed for the winter. I hope we can have a lot of fun and games and at the same time try to raise some funds for the region towards hosting the National AGM in April 2023.

Trimming Workshop in April 2023 – I have been asked by several members about running a show prep trimming workshop. This will take place in early April 2023 with experienced members who have trimmed sheep for many years successfully and are willing to share their knowledge. To find out more please contact me, Kay Carpenter on or message me on 07771 511445