Welcome to the News page for the Scottish Region. 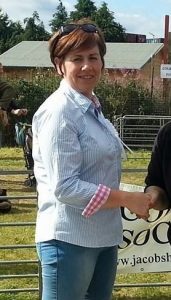 Llandeilo, Carmarthenshire breeders Wyn and Siwan Harries topped the Jacob Sheep Society’s Scottish regional show and sale at Newtown St. Boswells with a four-horned tup lamb selling at 1,200gns. Hope Randy Rock, born a triplet and by Hope Rocky Boy out of a Hyndshaw Highland Laddie dam, stood fourth in class but went back to Wales when it caught the eye of Steffan and Hanna Griffiths for their Stenna flock at Kidwelly, Carmarthenshire.  The same buyers also accounted for the third prize ewe lamb at 1,000gns. This was another four-horner from the Hope flock and by the same sire.

However, it was a Gleanmor Xcess sired four-horned ewe lamb from Hope which took the day’s female and reserve supreme championships, selling to breed stalwart Helen Baillie, Carluke, Lanarkshire at 700gns for her Hyndshaw flock.

The sale champion, a four-horned ram lamb from Hope and by Gobaith Star, made 500gns to M. Kelly, Broomilees, Melrose.

A shearling ewe from the Dunmor flock of Connor and Dalrymple, Linlithgow, made 1,100gns.  By Pentrenant Pimms out of a Luruha ewe, this four-horner went to Luruha flock owner Ewen Macmillan, Fintry, Glasgow. Mr Macmillan also paid 700gns for an unshown ewe lamb from the sale judge Jackie Jones, Welshpool. It was again a four-horner and by her own Milldale Toby Jones. Mr Macmillan was also selling, and his first prize two-horned sheep, a ewe lamb by Harbell Lincoln, made 450gns to J. Hardman, Windermere.

It was also a Luruha 2019 born ram, this one entered by George Harper, Hawick, which made 380gns to G.W. and M.E. Swanston, Coldingham, Eyemouth. Shearling rams sold to 400gns for an Arnydie Ninja sired four horner from Jacqueline Neill, Jedburgh selling to C.B. Strang-Steel, Galashiels.

There were also bargains to be had for anyone who took the trouble to inspect the 30+ sheep forward in the entire dispersal of Chelsea Lamb’s Jedburgh-based Jed Water flock. All fully registered but not breed Society inspected on the day, they topped at 400gns for a ewe. Ewe lambs and shearling ewes both reached 340gns. 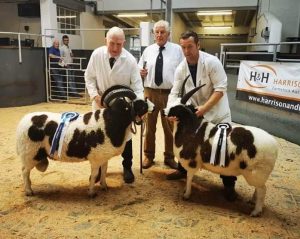